Today's retirees face the dread of one day running out of money. TontineTrust's digital take on a centuries-old investment concept is riding to the rescue. 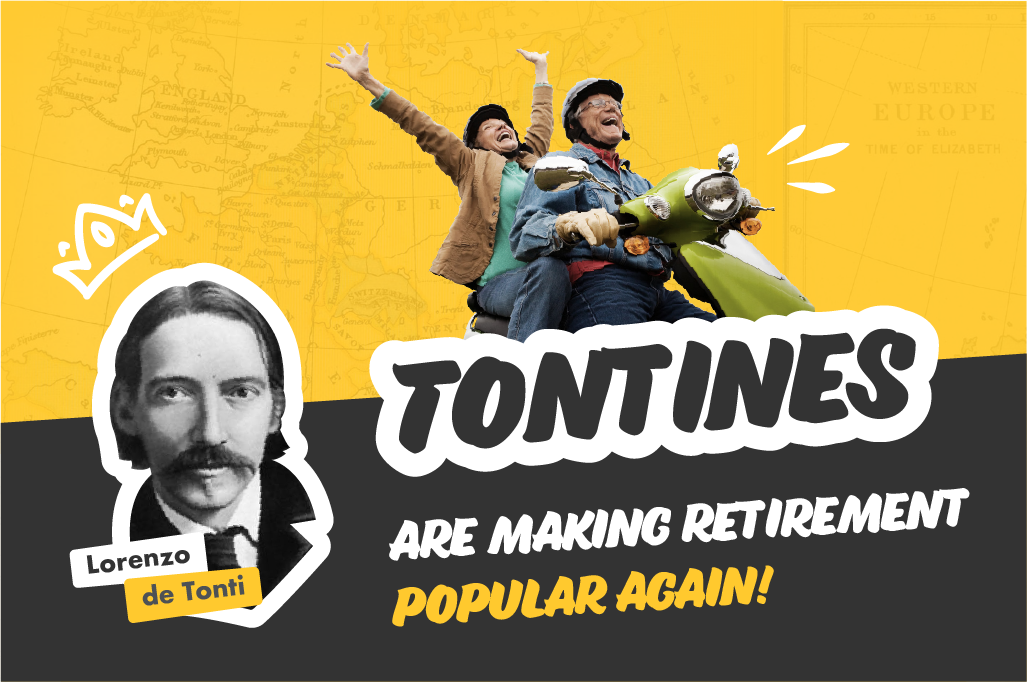 The tontine is an age-old investment concept that shares many features with today’s pensions. But there’s one big difference. While modern pension options inspire little enthusiasm among savers, tontines have a history of huge popularity.

Having been banned in the early twentieth century after becoming a victim of their own success, tontines have made a comeback. With the recommendation of no lesser organisation than the OECD, they are shaking up the pensions industry and bringing joy back into the lives of retirees.

A pension in its simplest form
Tontines owe their name to the seventeenth century banker Lorenzo de Tonti. His aim was to create a pooled investment vehicle that was capable of funding large public infrastructure projects. To encourage people to participate, he proposed paying income which would be paid in proportion to their investment for as long as they lived. Nothing revolutionary there, but what made the tontine standout as a potentially winning structure for the personal pension was the concept of the ‘tontine credit’. When a member died, any leftover money would revert to other participants in the tontine, thus guaranteeing a rising income and making those who lived longest very rich indeed.

Voluntary and very popular
Unlike today’s pensions – and in particular the highly expensive annuity - tontines were extremely popular. As ubiquitous as mortgages are today, they were purchased voluntarily and en masse. Some historians even attribute the rise of the insurance industry in America to the tontine.

In their heyday, an estimated nine million tontines were active in 18 million households. However, as less reputable issuers got in on the act, corruption and scandals caused tontines to be eventually banned in many countries.

Relaunched for today
But now they're back. Having been dormant for over one hundred years, tontines are making a spectacular return thanks to their qualification under new pan-European pension product (PEPP) regulations that go live in early 2022.

"We are putting a modern twist on a proven and highly successful investment product from the past", says Dean McClelland, founder and CEO of TontineTrust. "With its simplicity and amazing value for money, our state-of-the art digital pension has mass-market appeal to savers and retirees alike."

Thanks to charges capped at just 1% a year, the “MyTontine” pension is far cheaper than current “guaranteed” pensions because no expensive capital buffers are required. Rock-bottom costs also mean it offers higher monthly incomes, compounding the benefit of tontine credits.

The time is right
The return of tontines come at an important juncture. State pensions are under huge funding strain and defined benefit schemes are collapsing under the weight of their liabilities as life expectancy rises. Annuity rates are historically low and are likely to stay that way as central banks keep a loose rein on monetary policy.

With a structure that eliminates longevity risk, tontines are well positioned to plug that pensions gap and meet a proven consumer desire for lifetime income products. And that’s a concept that has drawn the sanction of the OECD, which has recommended tontine-style risk-sharing schemes as the default pension for all its 37 member countries.

Historically, retirees have shied away from lifetime income solutions, regarding them as a gamble that requires them to live for at least another twenty years before they get their money back. We at TontineTrust believe, by contrast, that our patent pending "roboactuary" technology used by the MyTontine pension to give full visibility to future incomes will encourage participation and, with it, a much-needed rise in the savings rate.

"There are societal advantages too," adds Dean McClelland. "By losing the omnipresent fear that they will run out of money, retirees profit from greatly improved health and happiness. Instead of dreading their later years, they are motivated to live longer and enjoy to the full the benefits they have earned."

TontineTrust believes that tontines will come full circle and become the popular phenomenon they once were. With national governments also showing great interest, they could be one of the most fundamental disruptors of the financial services industry in decades.

Pensions really are going “back to the future”.