The myth of the techno-phobe retiree

Smartphone usage is catching up quickly among older people and technology use can only grow. But for pensions, it's all about trust. 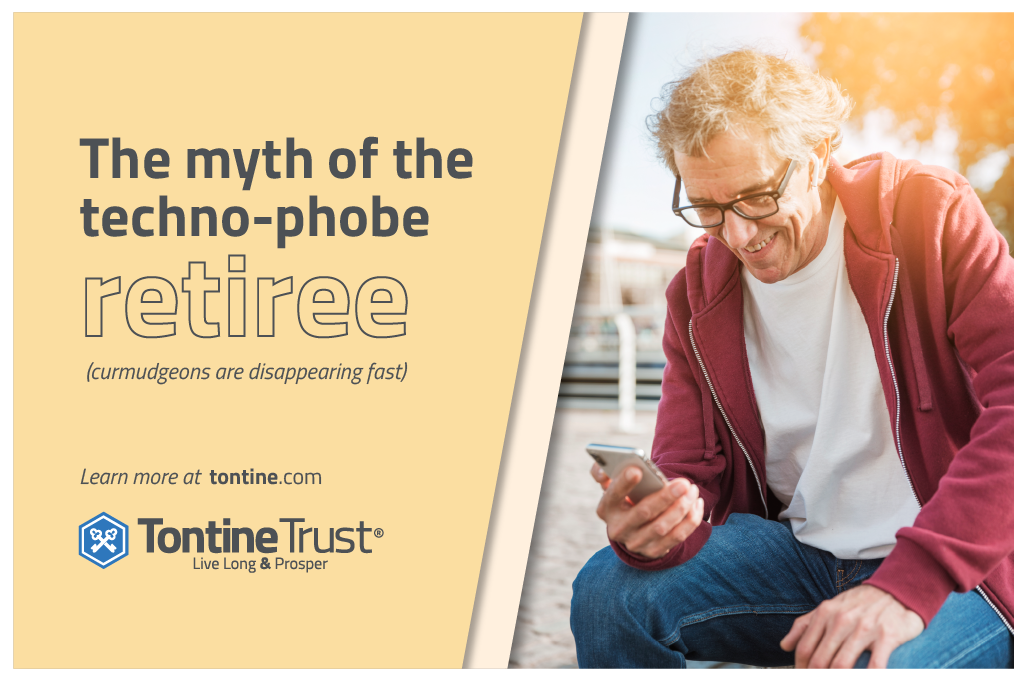 As you’d expect, here at Tontine Trust we’re crash-hot on telling the world about how technologically advanced our fully digital MyTontine pension app is. But one comment we often hear is “what about the retirees who can’t or won’t engage with technology? Aren’t finance apps just the domain of the ‘happening’ younger generations?”

We couldn’t disagree more. Alright, we all know at least one individual of mature years who, out of fear of cyber-crime or perhaps simply “the unknown”, shuns the digital world and insists that the old way is the only way. But for every one of those paper-statement-hoarding dissenters, there are many, many more who quietly embrace it.

As second-nature as picking up the telephone

Empirical evidence suggests that older people are highly adaptable to new technology. Indeed, the strict social restrictions that we all have had to suffer recently have accelerated their desire to participate. Lockdowns have meant that, for many, the only way to maintain contact with loved ones has been via a conferencing platform. Making a ‘Zoom’ call has thus become as second-nature as picking up the telephone.

Yet we shouldn’t fool ourselves that there is no generation gap in digital technology use. In the UK, for example, a 2018 survey reported that smartphone ownership drops from 95 per cent for the 16 to 34 age group to just 55 per cent for the over-55s. The numbers are similar across the developed economies.

Tweet a photo of a dachshund dressed as a ballerina

Should we really be surprised at that though? After all, the possibility of being able to tweet a photo of a dachshund dressed as a ballerina is unlikely to tempt the average 78-year-old to pop out and buy his or her first iPhone. Clearly, the brave new world is going to leave some behind.

We nevertheless believe that this generational divide will continue to narrow rapidly as new, tech-savvy cohorts of consumers move into their sixties and seventies. Having become dependent on them for everything from pizza delivery to satellite navigation to even buying a house, these baby-boomers are definitely not going to be giving up their smartphone addiction as they graduate into retirement. And for those still dragging their feet, the bequest of “last year’s model” from fashion-conscious children and grandchildren could be the foot in the door for smartphone adoption for many over-55s.

Another reason why smartphone usage is catching up among older people is the fact that a greater proportion of them regard ownership of smart devices as being “liberating”. Moreover, mobile access to digital is becoming indispensable to many from a practical point of view as apps play an ever-more important role in health monitoring and family communications.

While on the subject of health, interface technology is moving quickly. This allows those who have visual or dexterity impairment to participate more fully too. The barriers to digital access for the older generation are rapidly falling.

With more and more seniors saying that their finances are their greatest concern, how do they view “digital” as a way of managing their future prosperity? Certainly, the fear of being financially exploited is the greatest challenge in driving the uptake of digital financial products among older people. Pension companies will therefore have to devote considerable and ongoing investment to security in order to build and maintain that crucial trust with their customers, young and old alike.

The particular challenge for providers in gaining trust is that pensions are the last area of financial services to join the digital revolution. The demise of defined benefit schemes and the subsequent granting of pension freedoms have finally opened up the sector to innovation and disruption, which is now happening at pace.

Sit back and watch your retirement income grow

The winners will be those who succeed in both engendering trust and encouraging participation through a simple, intuitive interface which makes signing up as straightforward as watching a movie on Amazon Prime. Younger consumers, who have never known anything different, will be relatively easy to engage. For the older generation, however, it is up to providers to make that leap of faith as short as possible.

At TontineTrust, we have worked hard to make the process of signing up to a state-of-the-art digital pension as frictionless as possible. Fill in your details, make your contribution, register your face as your password and then sit back and watch your retirement income grow at the touch of a button in the MyTontine app.

Whether you are 18 or 80, the path to a better, more secure financial future should only ever be just a couple of clicks away.