Will the domestic pension market go the same way as Blockbuster?

No company can afford to stand still when customer preferences change. With the arrival of PEPPs, will domestic pension providers switch to tontines? 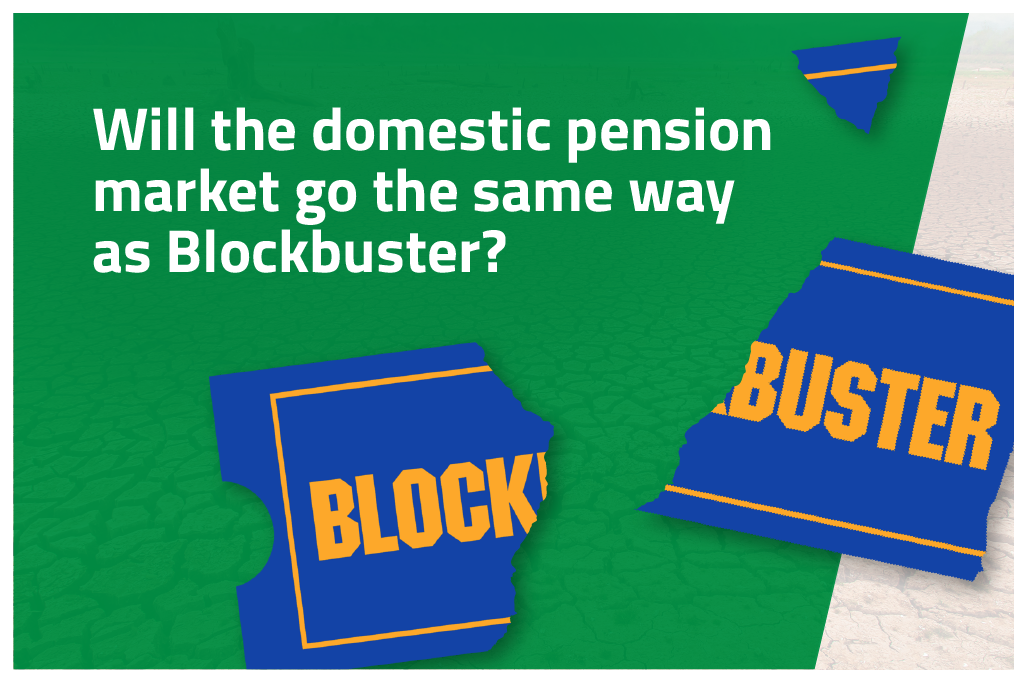 The arrival of PEPPs is going to be without doubt the greatest disruptor for the Irish - and indeed pan European - pension industry for a generation. Streamlined, forward-looking and cheap, they are poised to bring a compelling new alternative for millions of European retirees who have been underserved by their pensions for so long.

Will providers remain complacent or embrace the new opportunity?  History says that even dominant businesses that don’t respond to change and new incumbents can suffer a rapid and crushing demise. The industry would therefore do well to heed the cautionary tale of what happened to lumbering giant Blockbuster Video when a nimble little company called Netflix burst onto the scene.

Blockbuster was once one of the most well-known and successful consumer brands. Having forced its way into leadership of the fledgling home film rental market in the early 1980s, the company became ubiquitous, with its assertive blue and yellow identity being as familiar and ever-present in the world’s shopping malls as the “golden arches” of McDonald’s.

Blockbuster’s business peaked in the late nineties when it employed 84,000 people around the world and had a whopping 65 million registered customers. Yet just a decade later, the company had collapsed miserably into bankruptcy with debts of over $900 million. So what happened?

Blockbuster’s fall is a classic example of a company that fails to adapt to changing times and smarter new competitors. While it could be forgiven for not believing that such a seemingly all-conquering model could be totally undermined in just five years, it nevertheless stands culpable of not responding to obvious changes in consumer preferences.

When Netflix came along, it viewed large and expensive bricks and mortar outlets renting individual films for a fixed price, and then charging late fees to make their margin, as being old hat. While Blockbuster believed that movie lovers relished visiting their stores as part of a quasi-cinematic experience, Netflix suspected that a monthly subscription model that could mail its customers many DVDs for the same price of an individual rental would be a much more popular proposition in a consumer world that was rapidly turning ‘on-demand’. Their hunch proved to be emphatically correct.

To be fair to Blockbuster, it recognised in reasonable time that Netflix was a serious threat to its business. But instead of swallowing its pride and purchasing its competitor when it had the opportunity (it turned down an offer to buy Netflix for just $50 million) it decided to play copycat with its own subscription-based business. However, with this being less suited to its culture, the new model was executed less well and, crucially, was more expensive. The result was that Netflix rapidly hoovered up Blockbuster’s market share and consigned its rival to history.

Netflix continued to adapt to new technology and customer preferences by hitching up to the broadband revolution to become the world’s top content-streaming provider. As at 2021, it had a market capitalisation of $265 billion.

The Blockbuster experience is analogous for many incumbents in today’s European pension market. Like those big retail outlets, the insurance-based providers are shackled with substantial fixed costs – this time in the form of capital guarantees. They will find it increasingly difficult to compete with PEPPs that have fees limited to just one per cent both initially and annually.

More generally, the eclipse of Blockbuster by Netflix illustrates that today’s consumers prize simplicity and convenience almost as highly as they do cost. Holding out and relying on customer inertia will be a dangerous game, especially as pensions is the last sector of financial services to undergo reform and modernisation.

Tontine Trust is in the vanguard of the PEPP revolution because we think we have got plenty in common with our fellow disruptor-ninja Netflix. Like them we believe that you have to give customers what they actually want, not what you think they want. We also share their philosophy of creating a simple, technologically advanced but easy-to-use product at an affordable price. We can’t guarantee that our market cap will stretch to $265 billion in ten years’ time, but let there be no doubt that there is a  huge opportunity out there - facilitated by PEPP regulation - for innovative companies bringing fairness, simplicity and value to pensions.

To sum up, if they fail to recognise the landscape is changing, Ireland’s traditional personal pension providers may soon, like Blockbuster, be “Gone with the Wind”. By contrast, thanks to their simplicity, efficiency, transparency, portability and affordability, PEPPs, not least those delivered by Tontine Trust, will at last enable millions of Europe’s retirees to observe, “It’s a Wonderful Life”.