Tontine Trust raises funds to solve the pension crisis. The OECD and PEPP regulations open the door to risk-sharing tontine based retirement solutions. 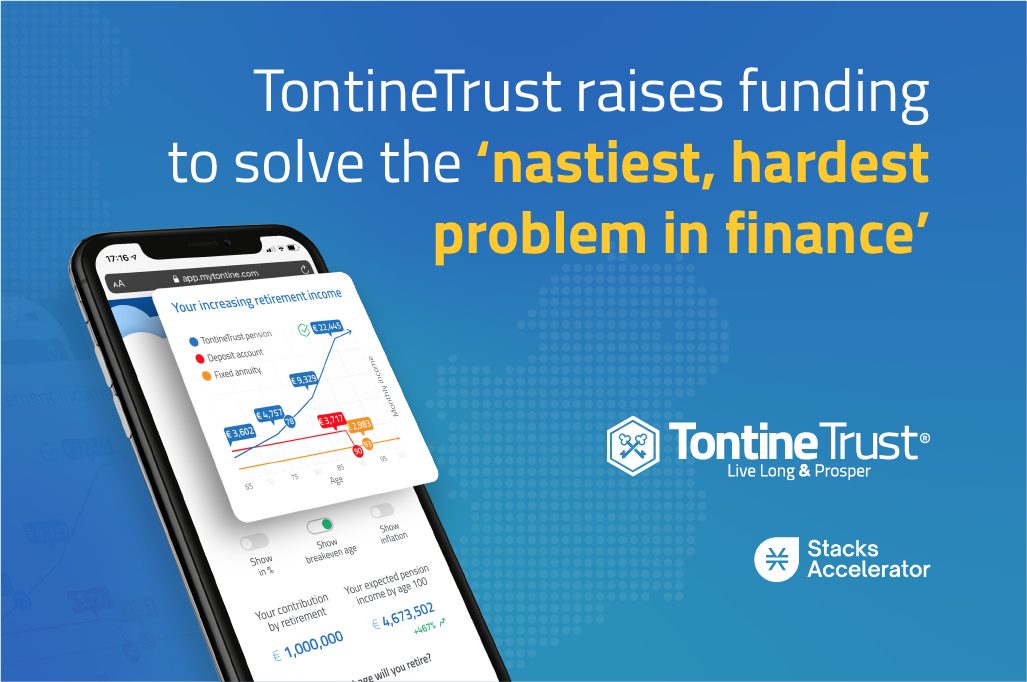 Dublin, Ireland, 15 October 2021 – Irish based fintech startup Tontine Trust plans to disrupt the global retirement industry by pioneering a new generation of pensions which enables savers to reduce risk and enjoy higher levels of retirement income according to new reports by the OECD.

Having completed the inaugural accelerator run by Silicon Valley-backed Stacks, the startup has closed an undisclosed seven-figure investment round led by Stacks. The funds are being used to finalise the development and launch of the MyTontine pension, which is set to be one of Europe’s first Pan-European Personal Pensions (PEPP) to be launched under new EU regulations.

"A few years back I was surprised to discover a major problem in the pension industry that will ruin the retirements of sixty million Europeans in the coming decade. After months of research I came across research papers explaining how the 400-year-old ‘tontine’ pension could become the ‘iPhone of retirement products’,” says Dean McClelland, the Dublin-born founder and CEO.

”I was convinced that a machine-learning tontine pension platform could turn the tide on the growing global pensions crisis. Here we are four years later and governments, the OECD, the UK, Canada and even traditional voices like the Lex Column of the Financial Times are all talking about tontine pensions.”

Whilst the Tontine Trust platform is a major technological step forward for the global pensions industry, the tontine risk-sharing concept isn't new. Two hundred and fifty years ago investors from across Europe subscribed to Irish tontine pensions and, in their US heyday, tontine retirement plans were five times more popular than annuities.

In recent decades, mentions of tontines were usually confined to episodes of The Simpsons,  M*A*S*H as well as novels and movies such as The Wrong Box and Kelly’s Heroes. However, tontines are now on course to be a box office success in the only major financial services industry untouched by technological innovation.

According to the Wall Street Journal, most baby boomers fear running out of money in retirement more than they fear death itself. Knowing that more and more of us are likely to live to 100 years old, calculating how much of your savings you can safely afford to spend every week in retirement is impossible. This is why Nobel prize winner William Sharpe described it as ‘the nastiest, hardest problem in finance’.

This is also why an estimated 84 percent of US and European retirees want lifetime income pensions. However, low interest rates and high fees have made annuities unaffordable, leading the OECD to conclude that they are no longer the best option when compared to the potential of tontine pensions.

This is where Tontine Trust comes in. Their globally patent-pending platform enables savers to solve their risk of living longer by pooling their savings together in a blind trust. In essence retirees are taking a bet that they will be the one that lives longest, and that if they succeed, they will inherit some benefits of those who passed earlier. Capitalizing on Stacks blockchain technology ensures the integrity of Tontine's blind trust pension system and eliminates moral hazard. By validating balances using smart contracts and publishing all transactions to the public blockchain, Tontine brings full transparency and security to pensions for the first time, giving savers the peace of mind they deserve in their retirement.

According to studies by the Swiss Federal Institute of Technology, this system enhances the savers’ pension wealth by 87 percent with zero added investment risk.

"We're at an exciting stage in our growth” said COO Richie Kelly, who left his role of Head of Pensions at Primark last year to join Tontine Trust. “In a few months’ time, PEPP will create a single market for pensions among over 550million consumers who will be free to select the best European pension for them. Irish tontine pensions have taken Europe by storm before and we’d like to think they can do it again.”

Much like previous fintech disruptor Stripe, the Irish-owned company has raised all of its seed funding from overseas but the team are considering an Employment Incentive Investment Scheme (EIIS) offering in the coming months to facilitate Irish investors that missed out previously.

If modern tontines prove as popular as those from centuries past, they could become a new  multi-trillion Euro industry and Tontine Trust hopes to set the standards in this new asset class just as Vanguard did to ETFs. Certainly the OECD recognises the advantages of tontines. In a recent paper, the OECD proposed that tontines are made mandatory upon retirement in 37 of the wealthiest countries in the world.

Tontine Trust is a fintech startup now headquartered in Ireland from where it is pioneering the future of pensions. The Tontine Trust platform delivers low-cost lifetime income pensions to individual savers, institutions, and governments using a collective risk-sharing model which is now endorsed by the OECD, the UK Department of Work & Pensions as well as numerous academics and respected think tanks around the world. The platform uses Stacks blockchain technology to fulfill its commitment to offer the most transparent pension funds in the world to give savers the complete peace of mind they deserve in their retirement.

Developed by a team of PhDs, Stacks enables the next generation of financial apps secured by the Bitcoin blockchain. Stacks was the first-ever SEC-approved blockchain offering that was backed by their investor network of Silicon Valley's top investors including YCombinator, Union Square Ventures, Winklevoss Capital, Digital Currency Group, Blockchain Capital, SVAngel, ZhenFund, Naval Ravikant, and many others.